(Photo: Idejni projekat/screenshot)
The Ecka interchange on the future Belgrade-Zrenjanin-Novi Sad highway (popularly known as the Vojvodina P), will be moved toward the future Linglong tire factory.

This is said in the request for determining the scope and the content of the environmental impact assessment study for the project of the construction of the 1st section of this highway, from Belgrade to Zrenjanin, which the PE Corridors of Serbia has submitted to the competent ministry.

The investors in the project are the PEs Roads of Serbia and Corridors of Serbia, and the preliminary design was prepared by AG Institut Novi Sad.

It seems that the new design would appease the Zrenjanin companies which have asked for the Ecka interchange to be moved several kilometers closer to Zrenjanin, compared to the design from the spatial plan.

The Zrenjanin Business Club (Zrepok) has explained the request with the needs of Linglong, but also the residents of Zrenjanin:

– The estimates are that, in the next several years, the number of heavy trucks from the industrial zones toward the Ecka interchange and vice versa will amount to around 1,000 a day, in both directions. A large number of those trucks would have to travel three kilometers toward the south to the Ecka interchange, and then go back and travel to Novi Sad, that is, the EU states. This especially pertains to the transport of goods from the production facilities of Linglong, whose purchasers are mostly located in countries which are big car manufacturers in western and northern Europe. Our proposition would reduce the traffic jams, the transport costs and the pollution. We would also get a much shorter and simpler road to Novi Sad, which would also serve the residents of the southern part of Zrenjanin – Zrepok said.

According to the request that the PE Corridors of Serbia has submitted to the ministry, the project of the highway of a total length of 110 kilometers entails the construction of a full highway profile which will have an impact on increasing the regional importance of the south Banat area, because, thanks to its position, it will improve the traffic service of the local self-governments covered by the project, but also the wider area covered by the “Banat Main Road”.

The beginning of the route is planned at the Ovca interchange, on a part of the so-called Northern Main Road Tangent (SMT). The route further crosses the railway, goes toward the northeast and passes the area covered by agricultural land, then crosses the Tamis river in the spot where a bridge is planned.

The route further continues northward, where the Glogonj/Jabuka and Kovacica interchanges are planned.

Further, after the interchange, the route turns toward the northwest, toward Ecka, where the Ecka interchange is planned near the tire factory under construction (Linglong). The route in this part is planned south from Zrenjanin.

Then, continuing westward, the route crosses the Begej river and continues toward the planned Zrenjanin Zapad interchange. This interchange is at the same time the end of Belgrade-Zrenjanin Section 1 (along with the connection to the bypass route north from Zrenjanin).

The preliminary design splits Section 1 into 4 sectors, presents them in more detail and introduces certain changes compared to the spatial plan:

It is planned up to km 11+500.00, in the length of 11.5 km. The beginning of the traffic route is planned in the proximity of the existing traffic route SMT, following the deleveled Ovca intersection. The route then goes in the south-north direction, crossing the existing network of amelioration canals, which are mostly set up along the east-west direction, as well as numerous farm roads. On most of them, bridge structures within the highway profile are planned. Deleveled crossings – overpasses are planned across the highway, at the crossings with the more important local traffic routes. The project envisages a trumpet-type deleveled intersection (Glogonj, at km 10+946.60), which enables traffic communication of the existing settlements with said highway route. Within the deleveled intersection, a “lateral” toll booth is planned. At km 7+450.000, a “frontal” toll booth is planned.

Construction of Belgrade-Zrenjanin-Novi Sad Highway to Start in October? – Chinese Shandong Interested in Other Projects Too

According to the previous design, Sector 4 (Orlovat-Ecka) was planned from km 47+200 to km 54+798, in the length of 7.6 km, with the beginning after the Orlovat interchange and the end at the planned Ecka interchange, and according to the new one, the sector will begin at km 48+000.00 and end at km 67+662.47, whereas the new planned length is 19.66 km, mostly to the right of existing IIA-grade state road no. 130 (Ecka-Kovacica-Jabuka-Pancevo). The trumpet-type deleveled intersection Ecka is planned at km 54+871 at the crossing direction of the IB-grade road no. 13 (Belgrade-Zrenjanin road).

The project says the rehabilitation, modernization and extension of the existing network of first- and second-grade roads in the corridor zone is planned as well.

Let us remind that the current minister of construction, transport and infrastructure of Serbia, Goran Vesic, announced in February, in his then capacity of the deputy mayor of Belgrade, that the City of Belgrade insisted to have the Zrenjanin Road included in the project of the construction of the Belgrade-Zrenjanin road and added that there were negotiations about it with the competent ministry.

– The plan is for the Zrenjanin Road to be fully developed, including the underpasses and overpasses, so that there would be no more “conflicts” in traffic and so that the speed on this road would increase – Vesic said on TV Studio B.

The project of the 1st highway section also says that the future traffic route is designed with two driving lines in each direction, each with a width of 3.75 m, rest lanes with a width of 2.50 m, shoulders of 1.0 m + 0.5 m, a median strip 4 meters wide and side banks with a width of 2.00 m each. The total width of the normal cross-section profile is 31 m, and the highway is designed for a speed of 130 km/h.

The conception of toll collection is planned through a closed system, and the position of all the side toll collection spots is determined by the locations of the deleveled intersections. 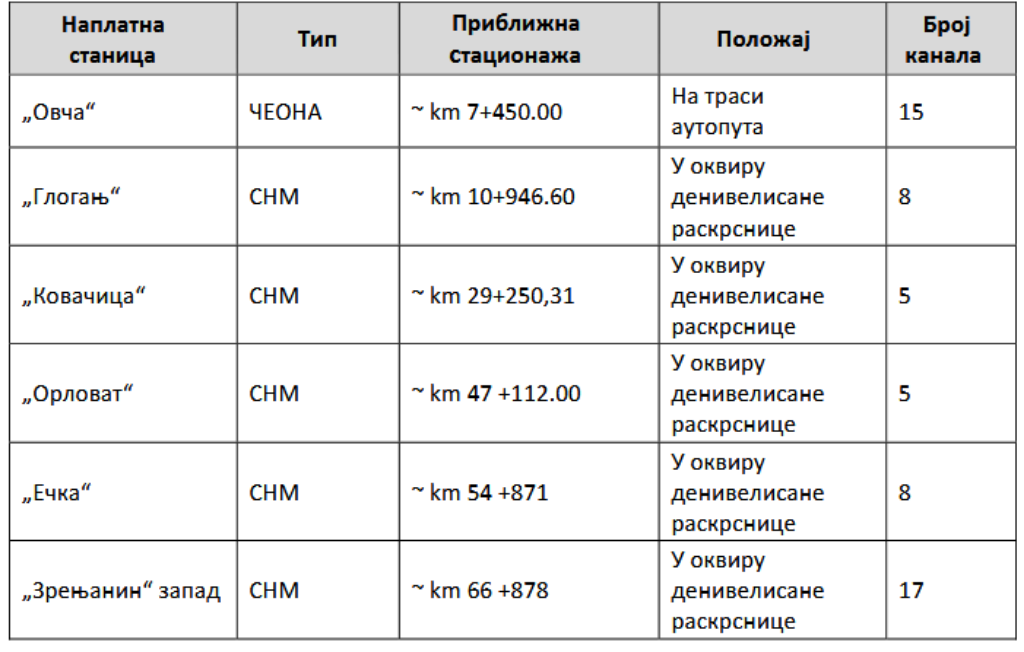 The positions of the toll collection spots and toll booths (Photo: Idejni projekat/screenshot)

The beginning of the construction of the Belgrade-Zrenjanin highway was initially announced for February 20, 2022.

Take a look at our info-map Construction of Highways and Fast Roads in Serbia and the Region.