REBEC: Renters are changing their habits, in several years 20% of all office space will be flex office 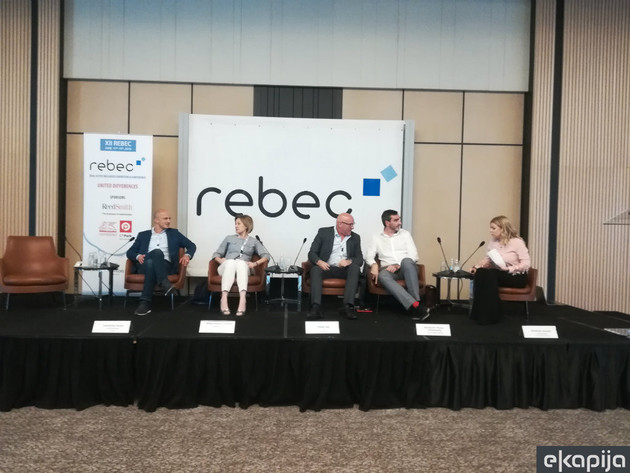 (Photo: Aleksandra Kekić)
The development of office space in Southeast Europe was the topic at the REBEC conference, held at Hotel Hilton Belgrade, which gathered representatives of companies from Croatia and Hungary, whereas the moderator of the panel was Katarina Jeremic of Online Real Assets.

An overview of the previous year showed that EUR 396 million had been invested in office space in the said region.

– Last year brought us office space built for a large number of users, as this is what large companies require now. Slight stagnation was noticed in Slovenia, unlike Serbia and Croatia – said Leonardo Zovko of Regus Croatia, whereas his colleague Mirta Ceranac Poljak of M7 added that there was an increased focus on the reconstruction of old buildings.

Hubert Abt of the Budapest-based company New Work said that the paradigm of office space and the demands were changing and that it was therefore necessary to change the way of thinking in those who design and build facilities.

– In a few years, 20% of all office space will be flex office premises, that is, open spaces, which offer other features in addition to the area for work, such as recreation or placed to relax at, which are also adaptable to users – Abt clarified.

Zovko added that space adaptation was necessary for attracting new renters and that people were often unaware of the advantages of new features in the market.

– Very few new projects are being done in Zagreb, and it's a good idea to put old buildings on the market after they are transformed. An example of this is Varazdin, where there are now several different renters at the former bank building, while the bank is located on the ground floor – said Ceranac Poljak.

Benjamin Perez Ellischevitz of RICS Budapest pointed out that infrastructure was very important for the development of the real estate market, especially the existence of a subway system, which is the experience of the capital of Hungary.

– The most demand for new office space comes from the IT sector. Budapest does not have much space for the construction of A-class buildings, and it is very hard to manage buildings of different purposes, so we avoid that. We are oriented to brownfield investments outside the city center and to sustainable buildings – Abt added.

Zovko said that, in Croatia, only those for whom low prices are the priority and those who need a sense of community and the sharing of knowledge in an office space went to the outskirts of cities.

– In choosing a location, the most important thing is to cooperate well with the investor, to have a good building for a wide range of activities – he added.

Abt pointed out that, in Budapest, people chose locations close to living spaces and shopping centers, with developed infrastructure.

– The focus is increasingly on green construction and waste management – he emphasized.

– It's important to talk to renters, an what we really lack is a sustainable business model. Renters do not only want equipped offices, but support as well, that is, someone who will take care of their needs. Property and community management is a new thing in the real estate market – Mirta Ceranac Poljak concluded.