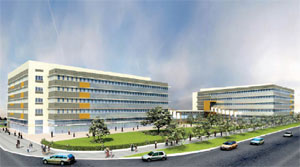 - In the first quarter of this year, office space market in Belgrade registered 3.3% growth of gross available office space against the last quarter of year 2008, primarily thanks to the opening of new business building within business park "Airport City". During this year, the market will also be enriched with additional 100,000 square meters of office space, which is currently under construction - "CB Richard Ellis" announced.

In spite of currently slower trend in the market, "CB Richard Ellis", the leading consulting company in field of commercial real estates, rented over 5,000 square meters of A-class office space in the first quarter of this year.

The building with the largest surface of rented office space of A class in this quarter is "GTC Square" in New Belgrade, of which exclusive agent is company "CB Richard Ellis".

Receiving full support from the expert team of company "CB Richard Ellis", primarily in selection of the right solutions for corporate requests, some of the leading local and international companies have already showed that they trust GTC's investor and became tenants in this modern business building of A class. "Robert Bosch", "Roche", "InBev", "Adidas", "Carlsberg", "Bosch Siemens", "Porr", "Schindler" and "Beokeramika" are only some of them.

Some of the largest tenants in 2009 are "Tetra Pak", "PSTech" and "MSI", which all together rented over 3,000 square meters of office space in business building "GTC Square".

Quite different situation in the market has, undoubtedly, led to the fact that lessors now have much more flexible position towards stimulus packages related to commercial terms that they offer to tenants, which, in some cases, significantly reduces initial rental fee.