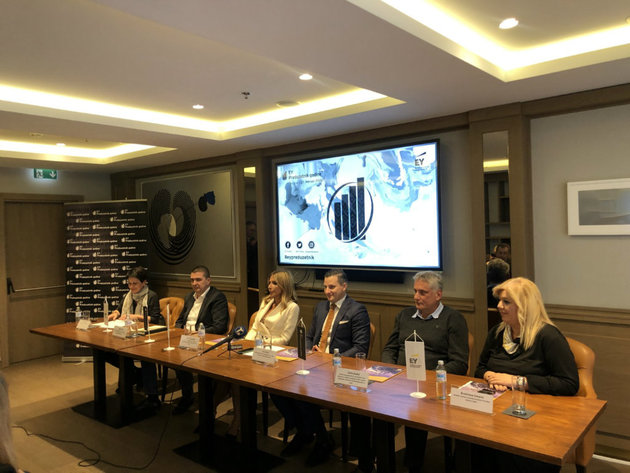 Ognjen Kisin, Mila Litvinjenko, Ivan Rakic, Darko Budec and Branislava Simanic
The auditing and consulting company Ernst & Young (EY) is giving out an award for the most successful entrepreneur in the Republic of Serbia for the eighth year in a row. The ceremony will be held at Hotel Hayatt on February 27, 2020, at 7 pm. On this occasion, a media conference was held at Hotel Marriott in Belgrade.

As Ivan Rakic, the leading partner of EY for Serbia, Montenegro and Bosnia and Herzegovina, said, there are thirty entrepreneurs, representing 24 companies from 14 towns of Serbia, in the running for this year's award.

– It should be noted that a third of the candidates are female entrepreneurs and that the number of family companies has increased – he added.

The companies employ over 1,000 people and had an operating income of RSD 12 billion in 2019 alone.

Branislava Simanic of the Chamber of Commerce of Serbia addressed the audience as well, talking about the Parliament of Entrepreneurs and the Council of Entrepreneurs, adding that the goal was to work on initiatives which would improve the operations of small and medium enterprises.

She added that there were efforts to boost female entrepreneurship and support enterprises when it comes to access to European funds.

Darko Budec, the founder and president of Buck, presides over this year's jury. He emphasizes that it is difficult to pick the best national entrepreneur and that the jury process takes 12 hours.

– There are clear criteria, some of which include integrity, market impact, balance parameters, innovation and so on. The most important factor, however, is the impression the candidate makes. This selection is in fact a preparation for the Monte Carlo “Olympics”, which are held in June – Budec said.

He emphasized that the goal was to promote Serbian entrepreneurship and that the winners are its ambassadors at the international contest.

– The Monte Carlo contest values integrity and entrepreneurial spirit above all – he emphasized.

Mila Litvinjenko, the owner of Aura, is another jury member. She believes that the success of Serbian companies is down to the fact that the local entrepreneurs run their companies well.

– It's important to surround yourself with associates who are ready to make decisions and take responsibility and to allow them to be independent – she pointed out.

She also believes that it's much easier today to position a company in the local market, because, as she says, goods from Serbia are of remarkable quality.

Ognjen Kisin, the fast growing entrepreneur for 2018, from Konstruktor, talked about the popular phrase “one's own master”, which is the motto of many entrepreneurs.

– It's important to think things through, to desire success and have original ideas. You are looking at overtime work, responsibility, sacrifice. The business runs you more than you run it.

Traditionally, the program is supported by the Ministry of Economy of the Republic of Serbia, the Radio Television of Serbia, the Biznis & Finansije magazine and the eKapija business portal.