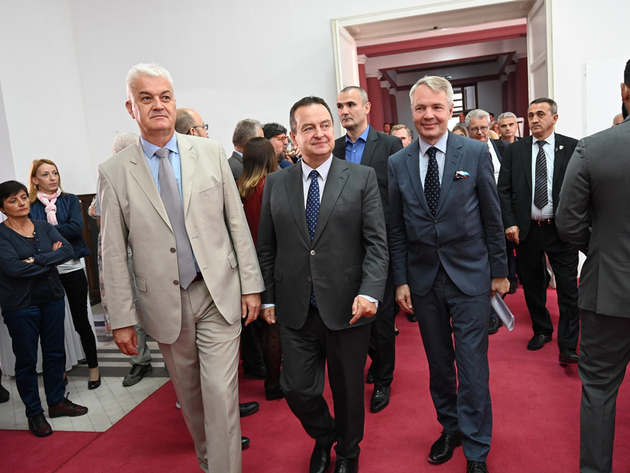 The foreign ministers of Serbia and Finland, Ivica Dacic and Pekka Haavisto, opened the exhibit organized at the Archives of Yugoslavia on the occasion of the 90th anniversary of the diplomatic relations between Belgrade and Helsinki on Tuesday, October 1. The diplomatic relations between Finland and the Kingdom of Serbs, Croats and Slovenes were established on August 7, 1929.

– The relations between our two countries have always been characterized by mutual respect. I am glad to be able to say that our relationships are great today – Haavisto said. – In the present moment, and in the future as well, the most important project our countries are working on is the EU enlargement process, which is an important instrument for the promotion of stability, peace and prosperity in Europe.

Ivica Dacic pointed out that, 90 years from the establishment of diplomatic relations, Serbia and Finland were reliable and honest partners.

– In the period when the European Union is going through internal transformation processes and when some other topics are more important on the agenda of member states, Finland continues to work actively on the enlargement policy, which is invaluable to us. EU membership remains our foreign policy priority and we will continue making maximum efforts toward carrying out all the necessary reforms – Minister Dacic said.

The exhibit is organized by the Archives of Yugoslavia, whereas the Archive of Urho Kekkonen in Niinikoski, Finland, provided the photographs taken during Kekkonen's visits to Yugoslavia in 1963 and 1975.