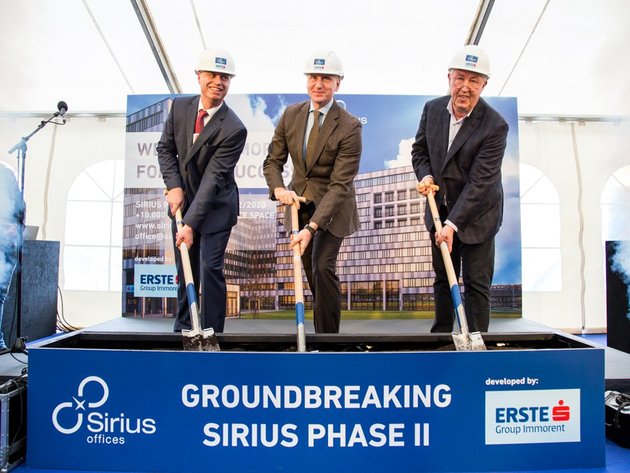 Erste Group Immorent is investing an additional EUR 25 million in order to build an additional gross area of 12,500 square meters across eight floors, as well as 200 parking spaces. The works will be completed by mid-2020, and the first users will move in in the autumn of the same year.

The total value of the investment, including the first part of the complex, which was built last year, is EUR 65 million.

– This part of the city is becoming one of the most dynamic business zones in Belgrade, a city which has recognized the need for high quality office spaces. We at Erste Group Immorent believe in Belgrade and are quite dedicated to supporting fast developing cities in southeast Europe. The high demand from potential renters has led to the expansion of Sirius Offices and the new part of the complex will be built in line with the highest standards and the most modern methods of construction and have a high renting potential – said Wolfgang Hausner, the Executive Managing Director of Erste Group Immorent.

He also announced that the square in front of Sirius Offices, at the corner of two major arteries of New Belgrade, will be turned into a green area meant for the relaxation of the building's users and other citizens, but also for the organization of various events.

Hausner emphasizes that the factors contributing to an additional investment are that the Belgrade real estate market is expanding, after the stagnation period of 2008-2014 and the recovery from 2014 till 2016, and that New Belgrade has become the center of first-class office space – the office space available in this municipality in 2017 was six times larger than in 2004.

The project is being carried out in line with the highest environmental standards and in compliance with the demands of energy efficiency and the use of recycled materials. A-class offices will have the unique floor height of 2.9 meters, providing additional comfort to the users. When the first part of the complex was built in late June 2017, Erste Bank was one of the first users to move in.

– I can safely say that the employees at Erste Bank are very satisfied that Sirius Offices is the bank's new seat since July 2017. Aside from higher productivity and general workplace satisfaction, I would also like to emphasize that out clients are also more satisfied with the look and the service at our new branch within this building, designed and adapted to their needs. With this investment in Sirius, Erste Bank and Erste Group have invested a total of EUR 345 million in real estate development projects in Serbia. In addition to office space, our portfolio features shopping malls, retail parks, hypermarkets and logistics centers. All these projects have contributed to the creation of new jobs and the enhancement of the construction industry in Serbia, which is Erste Group's mission – said Slavko Caric, the president of the Executive Board of Erste Bank.

The Sirius Offices facility is currently occupied by companies from the sectors of construction, IT and retail, as well as insurance industry. Among the top renters when it comes to the floor area is the Strabag concern, which built the facility in the first phase and has also been put in charge of the construction of the second phase.

– The fact that we have chosen to be one of the key renters at Sirius Offices only confirms the high quality, the modern and functional design of this facility and the advantages of its location and the connections with the important spots in the capital of Belgrade. In the upcoming period, we expect our operations to grow in all segments of the construction business. It will be our great pleasure to take additional office space in the second phase and thereby increase the capacities of our regional management building – emphasized Dragan Pavelic, the regional Managing Director of Strabag and a member of the Management Board of Strabag Austria.